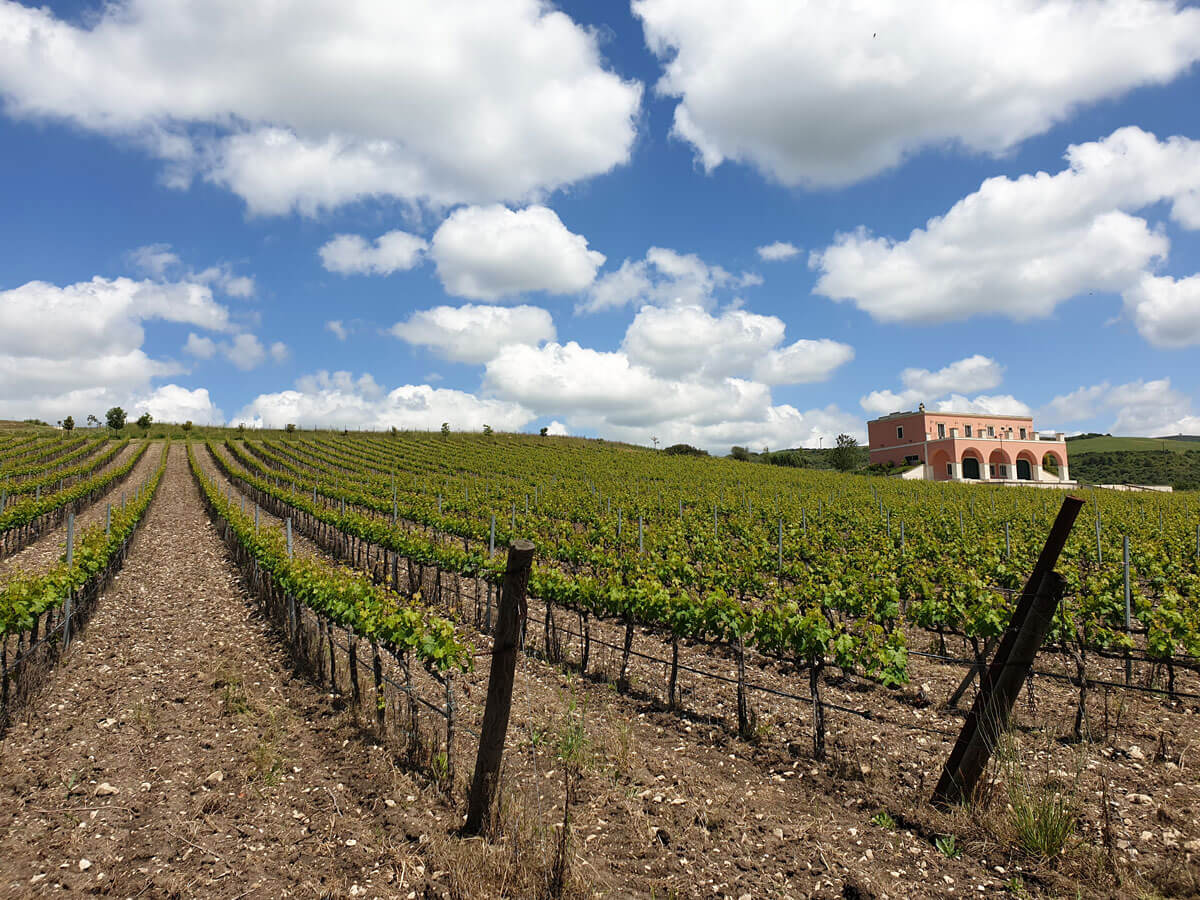 Matera, the City of Stones located in the Basilicata region south of the boot, is one of the oldest in the world.  It preserves a thousand-year history that is told by the testimonies of human settlements that it preserves from the Palaeolithic age to our times.  This majestic urban center developed from natural caves carved into the rock, which were subsequently modeled into more complex structures within two large natural amphitheaters.  The famous “Sassi”, the districts carved into the rock that compose it, are the Sasso Caveoso and the Sasso Barisano, which together with the Civita district are part of the Sassi di Matera Complex.  Its extraordinary beauty and cultural value led Matera in 1993 to be the first city to be declared a World Heritage Site by Unesco as a Cultural Landscape.
In addition to being a city rich in culture, art and breathtaking landscapes, Matera is an area highly suited to viticulture.  In fact, wine has been produced here since the appearance of civilization in these fertile lands.  One of the most fascinating wineries in this area is undoubtedly the Parco dei Monaci Estate, an ancient estate located 5 km south of Matera, dominated by an 11th century fortified complex.  The area falls within a landscape of extraordinary beauty, on the Murgia plateau, where the only cultivable terraces are housed on the bare limestone rock.  Here the Angevins, in the 15th century, brought French vines to produce the wines of the King of Naples.  In 1532, by testamentary bequest, the property assumed its current name and came to the Benedictine monks, who actively put into practice the famous monastic motto “ora et labora” with the cultivation of the vine.  In fact, in the second half of the 1700s, the monks planted the first stocks of Primitivo which, due to the qualitative qualities of this vine, extended throughout the plateau until reaching the Ionian coast.  With the aim of enhancing the territory chosen by the monks, Rosa Padula and her husband Matteo Trabacca, deployed their passion and expertise to resurrect the Parco dei Monaci Estate in 2007, with the precious guidance of the winemaker Vincenzo Mercurio.  Although the estate boasts a centuries-old history, the company is very young.
The wines are produced exclusively with grapes from their own vineyards that are grown according to the criteria of organic farming, and harvested strictly by hand.  The company operates with an eco-sustainable approach from the vineyard to the cellar and up to the bottling of the wines, thanks to the use of renewable energy sources.  In the estate, the vineyards occupy a small and shy space of just over 5 hectares divided into two vineyards: the Vigna dei Monaci of almost three hectares, which every year gives life to 10-12,000 bottles of Primitivo di Matera DOC vinified in purity,  both in red (Monacello) and in rosé version (Rosapersempre).  This vineyard harks back to the glorious days of the mighty 11th century fortified complex that overlooks it.  On the other hand, the Vigna del Parco consists of just over two hectares from which 8-10,000 bottles of Moro di Matera DOC are born each year, a blend of Cabernet Sauvignon, Merlot and Primitivo (Spaccasassi).
The first harvest of the young company was in 2011, and already from the first vintage, Monacello, the most representative wine of the estate, has won important awards.  A wine of great structure and power.  It impresses with the intensity of its olfactory bouquet which gives notes of ripe red fruits, plums and sweet spices.  In the mouth it is warm, soft and enveloping, a wine capable of expressing all the greatness of the Primitivo Lucano in a rich and satisfying sip.