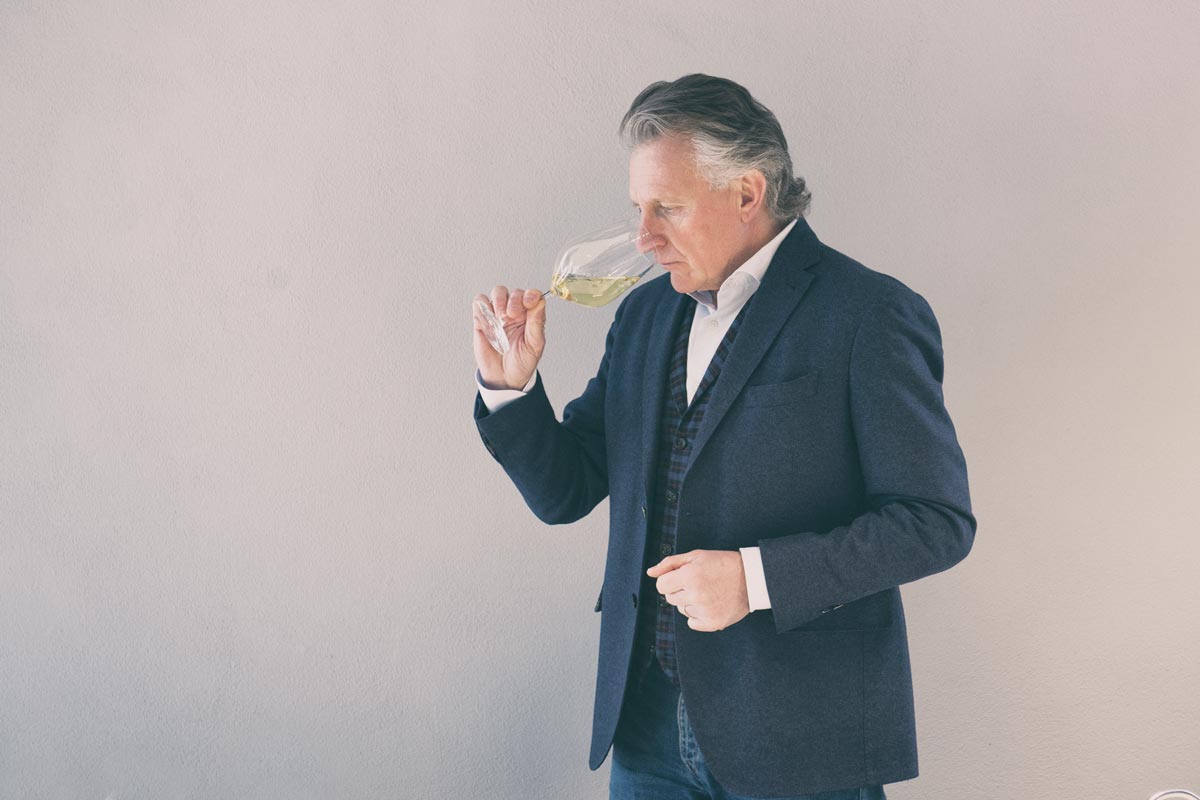 Pietro Pellegrini and Stefano Arrigoni, two entrepreneurs in the Bergamo area who with passion, knowledge and stubbornness managed to reach Olympus in their respective fields

That of the Bergamo area is a decidedly flourishing territory for what concerns companies and restaurants.

A basin where the hard work and inspiration of the population have counterbalanced a food and wine offer of great value, even if not as rich as in other areas of Italy.

Among this important number of entrepreneurs able to assert the strength of the territory, we can absolutely include Pietro Pellegrini and Stefano Arrigoni, respectively president of Pellegrini Spa and patron of the well-known restaurant “Osteria della Brughiera”.

Pellegrini’s is a story that has been handed down for five generations. Officially born in 1904 (even if its origins are to be found towards the end of the 19th century), the Cisano Bergamasco company is a leader in terms of imports, on a world scale, and distribution, on a national scale, of wines and spirits.

At the base of this centuries-old project, mutual trust with the wineries, the real backbone of the company.

Longevity has allowed this splendid reality to touch and support the changes that have gone through winemaking over the years, becoming real business partners of wineries within the vast Ho.re.ca universe.

Of course, in addition to the high degree of quality, there are guidelines for a careful selection of products: the wine territories must be represented in the best way, trying to avoid overlapping of products.

Furthermore, each producer must have a soul strongly rooted in their territory and be able to transfer it to wine.

The target? To be able to draw a geography map of the products to be distributed.

The numbers Pellegrini can count on give the right dimension of the strategic role of this reality; in fact, there are over 150 professionals who carefully follow a hundred companies, both Italian and foreign.

The labels? About 1800. “I started from history – says Pietro Pellegrini – its weight, the responsibility to continue the work started by my great-grandfather is one of Pellegrini’s core values.

When we have guests in the company, I like to emphasize the fact that in these rooms we have always talked about wine, since the very beginning.

Another value, in addition to seriousness, is the absolute importance of the supplier; especially nowadays when we are one hundred percent distributors, the relationship with the manufacturer is fundamental.

Finally, the passion for this profession cannot be missing: a competent and passionate distributor can understand before others what the evolution of the market may be.

Experience is necessary, but also a not indifferent mental openness “.

Pellegrini’s suppliers are both Italian and foreign, this means that the company interfaces in a completely different way with each other.

“The relationship between us and foreign producers or Italian producers is completely different.

For the foreign producer – continues Pellegrini – we symbolize their face in Italy; the role is to represent them in all respects, to be ambassadors as well as distributors.

With local companies, things are a little different, also because being in Italy their role and their presence become fundamental.

We must play a full partnership role. The best projects, apart from products and producers, are those that were born with us “.

Peculiarity of the company, that of having decided to marry only very serious agricultural projects.

“If we think of the agricultural periods, therefore of those producers who bottle almost exclusively wines from their own vineyards, the timing of change is much longer than in commercial projects.

As distributors, however, we can choose new producers, more interesting in relation to future market changes. An example can be that of champagne: we started with a champagne, when we were lucky enough to meet Jacquesson.

Since Jacquesson’s is an agricultural project, we cannot obtain more than many bottles per year. Over the years this line has achieved great success and we have been forced to include new producers, up to the present, in which we have as many as six champagne récoltants ”.

To an expert and trained eye like that of Pietro Pellegrini, new trends that are affecting the wine sector certainly cannot escape.

“There are changes in trend level, for example the shift from very structured red wines to finer, more balanced, elegant wines.

As regards the high-level ho.re.ca consumption channel, there has been a shift towards white wine, even for a gastronomic and menu issue: more fish and less meat are consumed.

What is taking place now is a growth, even if it touches little to us, of rosé wines. In Italy this product exists but it has yet to become a wine unrelated to seasonality.

The technical choices are also influencing the new perspectives: that of bringing wine closer to a drink, for example the can as a container or de-alcoholized wine.

These are the latest news, which we follow carefully, but also with due caution ”.

From great wines to great cuisine We move to the eastern shore of the Brembo, precisely to Villa d’Almè, where one of the most famous and renowned restaurants in the Bergamo area is located.

Elegance and refinement, together with lightness are also the cornerstones of the Osteria’s cuisine, voted yes to experimentation and research but without forgetting those flavors so dear to the patron Stefano Arrigoni.

In 1991 Stefano, together with his family, decided to inaugurate the restaurant: “the opening of the restaurant saw the union of two families, that of my mother, originally from Pontremoli, in Lunigiana and that of my father, from Bergamo.

In Tuscany my grandfather was a farmer and a butcher, so he produced cured meats; being born in an area of this type, I grow up with the flavors of Lunigiana, a territory that, in addition to Tuscany, is affected by the influences of Parma in Emilia-Romagna and La Spezia in Liguria “.

The opening of “La Brughiera” is all about familiarity, Stefano in fact is joined by his mother, in the kitchen, by his father and some employees.

“For the first few years, my mother took care of the kitchen, re-proposing the great classics of Lunigiana cuisine such as testaroli, soups, chestnut flour lasagnette and lamb.

Having an in-depth knowledge of cured meats, my father devoted himself to aperitifs, serving these wonderful cured meats in a particular cellar under the room.

After two years my mother had to leave the kitchen due to health problems; I therefore had to make use of the collaboration of cooks, stimulated and eager to grow, to do better ”.

From Stefano’s words it is clear how proud he is of his own structure, of a location meticulously cared for in every detail.

“The style of the restaurant has always been recognizable, with the passing of the years the care has increased to the present day.

The care and decorum towards “La Brughiera” are manic. Over the years the kitchen has also evolved, thanks to my collaborators, such as Stefano Gelmi, chef who has been working with me for 13 years.

We share the vision with Stefano, we are on the same wavelength “.

As for the present of the cuisine of “l’Osteria della Brughiera”, the owner Arrigoni has no doubts: “Ours is a cuisine that combines technical expertise not indifferent to the use of fresh and quality raw materials.

We decided to follow this direction, therefore a strongly Italian cuisine with contamination, because where there is no contamination there can be no progress.

The Bergamo area is quite poor on the culinary side, so I preferred to draw from various areas of Italy, mine is a cuisine that embraces Italy and some regions such as Piedmont and especially Tuscany. Even the ingredients we use are a sign of these regions: mushrooms, artichokes, tripe, offal. But let’s not forget our great use of fish ”.

As previously mentioned, the cuisine of “La Brughiera” finds in lightness one of its trump cards, a philosophy that also winks at vegetarians: “Ours is a complex cuisine, which plays on the freshness of the ingredients and on the lightness ; we use a lot of vegetables, in fact we also have a vegetarian menu.

We often use the extraction technique to obtain delicate sauces, without using fats, flours or thickeners. One of the kitchens that I like and inspire most is that of Niko Romito, who is also devoted to lightness ”.

There are many dishes at Osteria della Brughiera “which have met with great success, preparations that will remain young and innovative forever.

“There have been some of our dishes capable of enjoying a lot of success but there is one, created 6 years ago, which has all the characteristics to remain young even in 40 years, I’m talking about” The three Zetas “: pumpkin, zola and ginger.

Three ingredients only to create a dish that embodies simplicity. I have always been fascinated by ravioli del plin, an incredible product. So I thought of changing the size and making a fondue with Angelo Croce’s Gorgonzola.

The ravioli has a fairly pronounced hollow just to be able to contain more cheese “. But how to taste these ravioli? Stefano, with a stroke of genius, decides to use a particular tool: “I was looking for elegant and useful tweezers to consume this ravioli, when I had a shock; I remembered a pliers designed and used years earlier by the great Gualtiero Marchesi, a stick not untied but joined at the top, almost like a spring.

The worthy conclusion of this dish, in my opinion beautiful in every respect: from sight to taste, passing through the cultural reference to the ravioli del plin. Regarding the combination with our “signature dish” I recommend Yantra 2011 IGT Toscana from the Sette Cieli estate “. 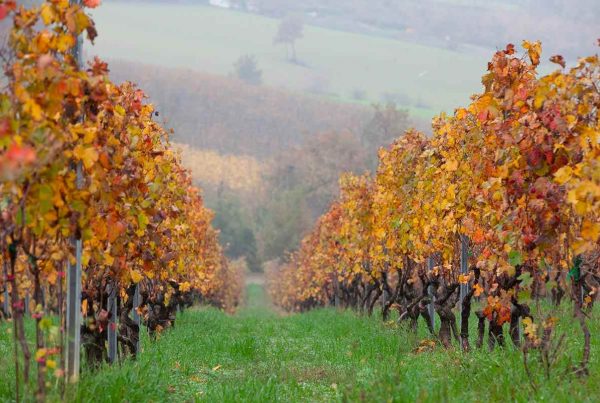 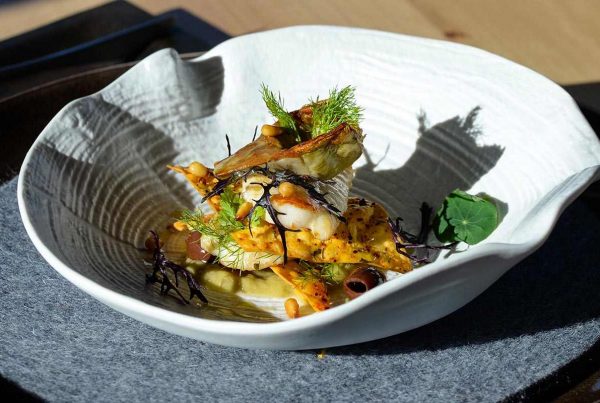