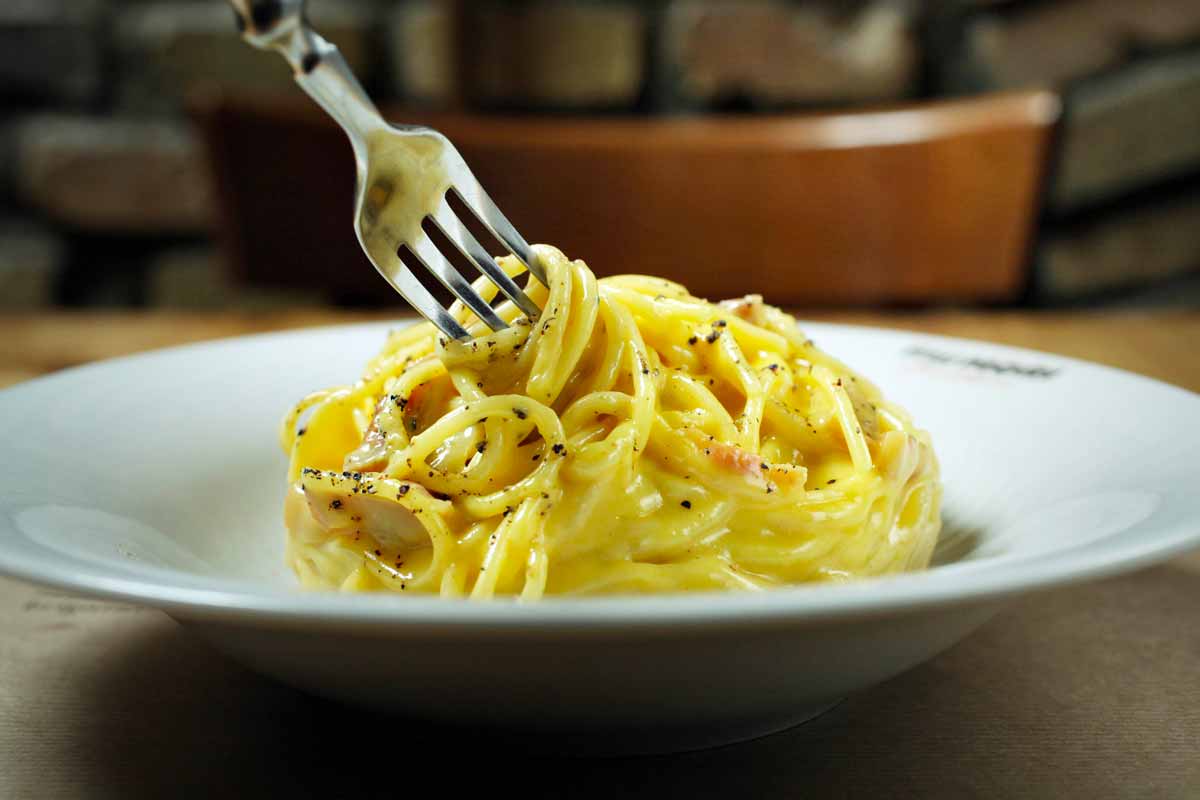 The Roman tradition in the kitchen resists and updates

From Alfredo alla Scrofa to Armando al Pantheon, up to the innovative spirit of the Sacred and Profane: a journey through the Capitoline cuisine doc

First loves are never forgotten. And it is a visceral love that binds to the tradition, history and ingredients of the first courses of the Lazio region. Reproduced throughout Italy and among the most imitated abroad, they identify the profound belonging of the Romans to the territory. Few raw materials but characteristic and of high quality. Historically easy to find, all the ingredients of Roman cuisine are poor, but combined with wisdom they create an explosion of taste. Bacon, cheese and pepper at the base, combined if necessary with tomato or egg. Nothing more. Reinterpreted, broken down, revisited, we find every one of them. But simplicity, authenticity and respect for tradition win over everything. And this is how the Proloco Trastevere restaurant thinks, a shop founded in 2018 which dedicates its cuisine to local production excellence with classic dishes of the Roman and Lazio tradition. With its half rigatone Lagano all’Amatriciana with pork cheek from the Dol supply chain and pecorino romano DOP, it aims at the territoriality and certainty of the controlled supply chain using ancient cooking methods and also combining modern techniques. In all the dishes we find the history of Lazio and its small artisan companies. A story that comes from the project on the territory of the Lazio Region operated by D.O.L. “Of Lazio Origin” which has as its objective the research, protection and enhancement of the eno-gastronomic excellence of Lazio. Not far away we find, a stone’s throw from the Trevi fountain, Sacro and Profano, led by Klaus Begaj, a restaurant that has made Roman cuisine its own, so much so as to “desecrate it”. The “sacred” of tradition contaminated by games and “profane” tastes. The proposal of this restaurant, despite this particularity, always remains anchored to the territoriality and to the continuous research of products. It therefore proposes both a sacred carbonara, as per tradition, with semolina pasta, bacon, egg, pecorino cheese and pepper, and a profane “Gasperino” carbonara to be enjoyed with your eyes closed because it has nothing to do with the dish you expect. to be in front. Several innovative and risky dishes that stimulate curiosity and the palate. Remaining on the carbonara theme, Luciano Monosilio defined as the “king of carbonara” must certainly be mentioned. Luciano’s carbonara, creamy and starry, is defined by Luciano himself: “Nothing special, just a little technique: eggs (only the yolk), pecorino, bacon, pepper, spaghetti”. In his restaurant after the divorce with the legendary Pipero it is possible to taste this dish, renowned for being among the best in the capital, at intelligent prices. In 2004, a family-run tavern was born, Osteria Fratelli Mori, now run by the mother and the two brothers Alessandro and Francesco. As in any family, cooking linked to childhood memories is handed down and continued. A menu based on the Roman tradition with local products bought directly from the Testaccio market. Cacio e pepe, rigatoni all’amatriciana and carbonara challenge every customer who is passionate and has a good fork when making a choice. The wine list is also based on Lazio labels, especially organic and natural, selected by the brothers, both sommeliers. Alfredo alla Scrofa is a historic restaurant that emerges from the carbonara-amatriciana-cacio e pepe triptych. Since 1914 he is known for his fettuccine made for the first time by Alfredo di Lelio for his wife. This dish has now become a symbol of Italian cuisine around the world. Here too there are only three simple ingredients: butter, Parmesan cheese and a very thin fresh pasta. The first to turn the spotlight on the fettuccine were the silent film actors Mary Pickford and Douglas Fairbanks who tasted them in the restaurant in via della Scrofa during their honeymoon in Rome in the 1920s and were so enthusiastic that, returning to the States , sponsored the restaurant with their friends and actors in order to encourage many of the celebrities of the time to try this now iconic dish. Another important pivot of Roman history is Armando Al Pantheon, managed since 1961 for three generations by the Gargioli family. It takes its name from the patron Armando Gargioli, who had set himself the goal of serving a high-level Roman cuisine. Today, as then, the sons Claudio, chef of reference, and Fabrizio bring to the table the must-haves of the Roman world: amatriciana, carbonara, gricia, rigatoni with potato, cheese and pepper, fettuccine with chicken regaglie, tonnarelli with goat ragù and other first courses dishes that follow the seasonal course and trace the ancient Roman customs. Tradition is fundamental to the philosophy of the restaurant and of the owners themselves, who are attentive and respectful of each recipe handed down from the end of the eighteenth century, when the family settled between the historic Via Giulia and Campo de ‘Fiori. Each selected ingredient respects the territoriality and the quality worthy of the name of the restaurant thanks to a consolidated relationship with high-level suppliers. Finally moving away from the center, in the Ostiense area we find a restaurant that offers both innovation and tradition, Trattoria Pennestri. Born from the collaboration between the Italian-Danish chef Tommaso Pennestri and the Argentine service manager and sommelier Valeria Payero, in 2017 Trattoria Pennestri manages to blend the passion for good food with a deep respect for tradition. Traditional cuisine interpreted by the two young non-Romans, but maximized with a contemporary cuisine. The real concept of a refined and decidedly successful restaurant is that of a place where not only you eat and drink well, but you feel good, “a bit like home”. An always new menu that manages to touch all the strings of Roman cuisine by playing with some contamination. You can taste a balance between new and classic, even in the location and in its design, between the rough wood and the red of the walls you wink at the bark of the plane trees of Lungotevere and at the facades of historic buildings.