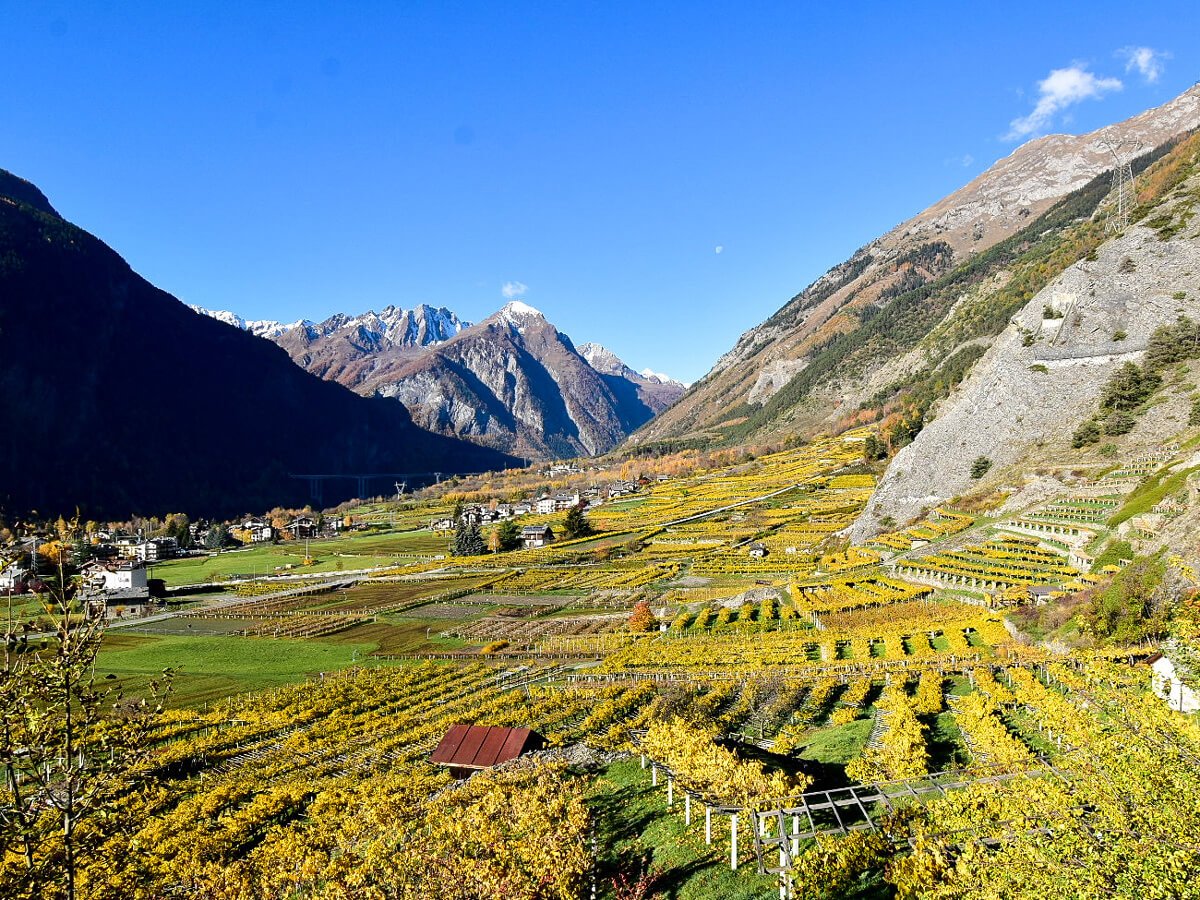 A journey to discover the wines of the Aosta Valley

13 native vines of the smallest region of Italy

A backdrop of imposing mountains that enclose breathtaking landscapes made of forests, alpine lakes, terraced vineyards and charming villages. With its 3263.24 square kilometers of extension, the Aosta Valley is the smallest of the Italian regions. It represents only 1.1% of the entire area of Italy. But the Aosta Valley is also one of the most fascinating regions in terms of the wine scene. Not many people know about it, but this wonderful region is the one with the most native vines considering the small extent of the territory. There are 13 native vines of this region, among which stand out the Petit Rouge, Mayolet, Priè Blanc, Premetta, Fumin, Cornalin and Vuillermin. The influence of the French, Swiss and Piedmontese neighbours is felt not only in the dialect and in the rich gastronomy, but also in the wine tradition. In fact, to the 13 autochthonous vineyards of the Aosta Valley are added another 25 coming from neighboring regions, which have found in the Aosta Valley the ideal conditions to express the best of themselves and of the Aosta Valley terroir. Among these we must mention the Nebbiolo, known locally as Picotendro, the Petite Arvine arrived from Switzerland, as well as the Chardonnay, The Pinot Noir and Gamay arrived from France. It is an almost entirely mountainous area with a minimum altitude of 322 meters above sea level (in Pont-Saint-Martin), a maximum of 4810 (Mont Blanc) and the flat valley floor where the Dora Baltea flows. In fact, one of the peculiarities of this wine area is that there are about 900 meters of difference between the lower area (Donnas) and the higher (Morgex and La Salle). The DOC Valle d’Aosta or Vallée d’Aoste, is the only denomination of origin present in the territory and provides for 31 sub-denominations referring to certain areas of cultivation or to specific varieties and types of winemaking. From north to south, our journey began in the villages of Morgex and La Salle, where we find the highest vineyards in Europe, immersed in a context of rare beauty, with the background of Mont Blanc, what is called the eighth wonder of the world. The vineyards of Priè Blanc are located at an altitude that reaches 1200 meters above sea level. They are raised in a low pergola to allow the plants to take the heat of the earth. These wines smell of mountain herbs, with a strong crispness and moderate alcohol. If you want to discover the best of this area, you should definitely visit Ermes Pavese and Cave Mont Blanc. The latter, is specialized exclusively in this native grape variety, which produces both in the classic firm version, classic method, up to Vin de Glace, the only Italian Icewine. Continuing along the road that runs along the Dora Baltea, we arrived in Arvier. Located in a natural amphitheater, here the vineyards are reared on deep steps facing south and benefit from constant exposure to light and heat of the sun. That’s why the most valuable wine that comes from it is called Enfer (which means hell). The most important variety of this area is the Petit Rouge which forms the base of the Enfer d’Arvier (minimum 85%), one of the most intense and full-bodied reds in the region. The winery not to be missed in this area is Co-enfer, which also makes an excellent Mayolet, both in the firm version and classic method rose.Continuing towards Aosta, the capital of the region, we arrived at Les Cretes, one of the most important Valdostan wineries that gives life to some of the most famous wines of the region such as Chardonnay Cuvée Bois. Not far from the city center, we met Daniela Dellio of Maison Agricole D&D, a small family-run winery, with beautiful vineyards overlooking the city of Aosta. His Torrette Superieur is one of the best we have tasted. Continuing south, always in the area of Aosta, we visited Grosjean Vins, a historic family-run winery where we tasted the only pure Premetta, a “red” fresh, elegant and fruity, with a color so low that it looks rather a rosé, a wine not to be missed. At the end of our journey we arrived in Donnas, where we discovered Piantagrossa, one of the most fascinating realities of our journey. In this small winery Luciano Zoppo produces three versions of Picotendro, a version aged only in steel, one aged in French oak Tonneaux, up to Georgos, produced with dried grapes.